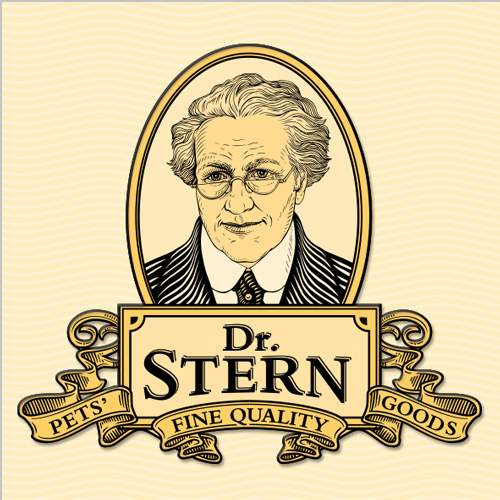 Dimela (now Dimedium) planned to introduce a range of pet foods which would have to compete with the long-established market leaders – but we would not have the huge adverting budgets of the well-established multinational pet food brands. The new brand would have to very much rely on the packaging itself to do the selling.

I proposed the concept of inventing a “retro brand” – a brand which looked as if it has been well established and trusted for many years in western European markets. The packaging would also follow a retro style allowing it to be clearly different to the established design formula “new, improved – happy, healthy pet photo” of mainstream pet foods on the supermarket shelves.

Drawing on Dimela’s veterinary background, I proposed the name “Dr. Stern” with a portrait of a wise man, with a kind face, yet the air of a conservative, disciplined vet or dog breeder.

The foreign, retro brand concept also helped to solve the problem of multiple languages. For the Baltic and Nordic markets, we needed to include 6 languages on the front and back of packs (Estonian, Latvian, Lithuanian, Russin, Finnish and Swedish). So which to make most prominent on the front of the pack? The solution was to add one more language, English, for the dominant product name, and hence the English text “Pets’ fine quality goods” is added to the antique style ornamentation in the brandmark.

The logo is drawn in copperplate etching style and is very detailed. Line weights and spacing between lines are carefully calculated to allow the logo to be printed in very small sizes while also showing interesting detail when printed large scale.

If needed, for example because of lack of space, the brandmark can be used without the portrait illustration element.